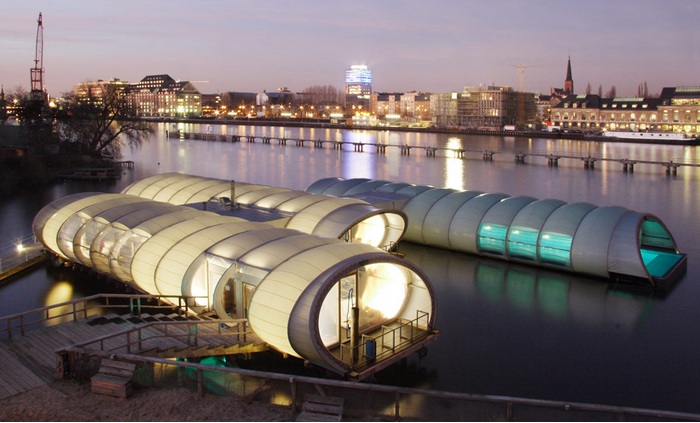 "A catalyst to enliven this area of the riverbank"

Set behind a rundown warehouse on the Eastern banks of the Spree in Berlin is an area which could still be referred to as “up and coming”; Badeschiff – a floating swimming pool and sauna, with a cool bar, deck area and DJ. Badeschiff, first opened in 2004 and was conceived by local artist Susanne Lorenze, Berlin City Art Project and Architects AMP and Gil Wilk, to act as a catalyst to enliven this area of the riverbank.

As the Spree is far too polluted to swim in, this floating pool gives Berliners, the chance to feel like they are swimming in the river throughout the year. Converted from 3 boats it provides a 32 x 8m pool, which opens at 8am and runs through to midnight. During the summer it’s a hot spot for the young and trendy of Berlin who are attracted by the party atmosphere and a chance to cool off during the hot summer months. However, in the winter the whole site is covered by a translucent shell and becomes a wellness centre.

I love the fact that this relatively cost effective development appeals to such a wide catchment throughout the year. It has become a destination in its own right, listed in many a guide book or as a site to visit in Berlin. Despite the effort required to find it, its well worth the trek and maybe a London developer could follow suit – how cool would it be to swim in or near the Thames.