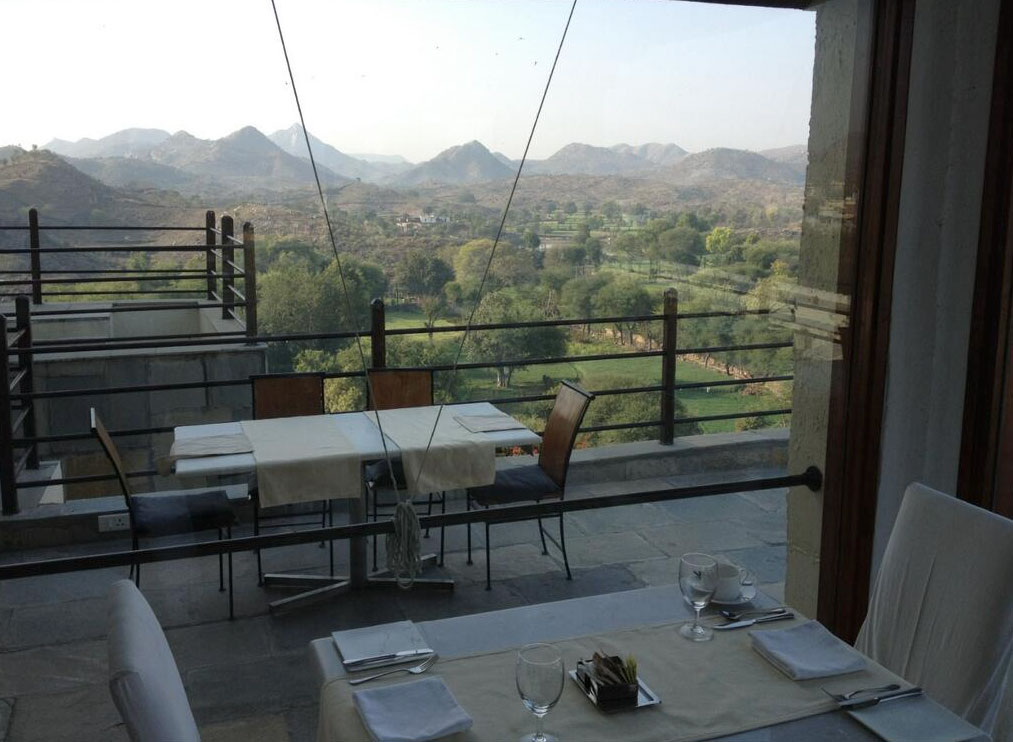 "the definition of Indian Heritage shod in a pair of Louboutins"

After an hour of sucking in our breath, dodging overladen lorries carrying marble on the national highway to Delhi, we arrived at the kilometre long driveway leading to our hotel, with its stark silver on black signage. The imposing sight of Devi Garh, the 17th Century fort cum palace occupies one of the most strategic passes in Rajasthan and rises from its perched hill position with terrifying dominance. The uplighters casting impressive shadows against its many towers, balconies, and crenulations. Very rarely are our expectations exceeded, but on this occasion a Howitzer blew them out of the water. Uniformed guards saluted our arrival, porters scurried to open our doors and we exhaled a sigh of satisfaction. We hopped out and followed the long low-lit path to the main entrance and staff sporting designer black Nehru tunics greeted us. We gathered our jaws off the manicured central lawn as our eyes struggled to take in the magisterial sight of Devi Garh, domineering, stark, confident and undeniably the most impressive translation of hospitality we had encountered in Rajasthan. Stone sculptures lay casually strewn across the lawn as if ditched from the sky by the gods.

At each turn casual elegance promised mystery after mystery. Historic frescoes twinned with floor sculptures in the shape of lotus plants, housed in a courtyard riven with marble patios softened by jade clipped hedging. Even the air tastes tranquil here. Several flights of granite steps leading to secret chambers and a series of courtyards led us to our suite. Which was designed and assembled with an immaculate eye, sinuous marble with a quadruple aspect inserted with a window seat the size of a generous bed. The split-level led us to our low-slung marble based bed. We shrieked with a lottery winner’s surprise and with childlike fascination we explored cupboards, boxes, wardrobes, drawers and anterooms, gasping at the multi level dressing area and bathroom, rather than gilding the lily, this is simple opulence. That evening we celebrated our arrival with pre-dinner drinks, served in a bar styled from a Bond villain’s lair. The Maharani made herself at home with a ginger infused Champagne cocktail and I put up with…a Martini, of course. Dinner would have melted the hardest of hearts, the hotel was a scene lit by a thousand candles, soft glow resting on the curls of a carpet of rose petals.

Imaginative, modern Indian food was served buffet style, fireworks rocked the clear sky and we filled our mouths with food created by a gastro God. Being a nosy chef and food adventurer has its advantages. I wanted to meet the brigade behind the silkily smooth Murgh Palak (Spinach and Chicken curry) and their interpretation of a fiery Rajasthani classic, Laal Maas, mutton soaked and slow cooked in Kashmiri chillies, but this version was tempered with almonds and the gentle touch of buffalo milk. The region is known for its opulent and sometimes heavy food, however the talented chef, Rakesh and his team delivered course after course with the lightness of a ballerina’s pirouette. This kitchen was capable of delivering world peace with these astounding treasures, truly unifying and crossing cultural and culinary boundaries.Devi Garh attracts a cosmopolitan set, French Trustafairians, Hollywood casting agents, Scandinavian designers, Indian oligarchs and apparently Liz Hurley…in our situation it was definitely a case of ‘fake it ‘til you make it’. How to describe Devi Garh? In a fast changing culture which is thousands of years old, I think it’s the definition of Indian Heritage shod in a pair of Louboutins.