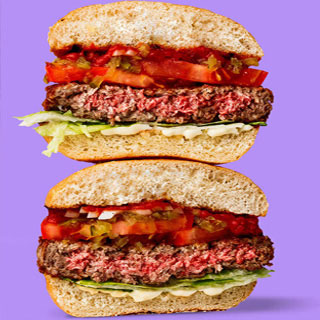 "It looks like beef, and if I’m really honest I preferred it to real beef!"

It’s hard to ignore the meat free movement and it’s no surprise that LA, the land of the smoothie and yoga leggings, is leading the way.  Impossible “meat” has been not so quietly conquering the US food industry and is now waging a full blown war on all things meaty.  The “meat” itself is a high tech amalgam of plant-based substitutes which mimic meat in almost every way possible. It bleeds like meat, griddles like meat and can be cooked to your preference, rare, medium or well done. High profile backers include Bill Gates and Google and all across the world other tech companies are looking at creating their own derivatives as Impossible struggle to meet the demand.

On a recent trip to LA it was always my intention to seek out this solution solving patty, but I didn’t have to search very far.  Impossible meat has definitely conquered the US.  From Umami Burger to White Castle, Soho House to Momofuku its everywhere and growing.  It’s even popping up in Michelin starred restaurants like Public in Manhattan.  So after reading all the hype over the last couple of years, I was intrigued to see if it really was as good as they say it is.

Impossible meat is very good. It really does taste of beef.  It looks like beef, and if I’m really honest I preferred it to real beef! It seems like I’m not alone as the waitress told me they are now outselling beef patties 3:1 in that particular restaurant. The times, they are a changing!

Impossible meat has a wide range of positive ramifications.  Every Impossible burger that is consumed saves the equivalent of 75 sq ft of land not farmed, or half a tub full of bathwater or 18 miles of emissions in a car. In a society conscious world you can eat healthier and make a significant difference.

At this stage I think it’s worth mentioning that not all meat free eaters have a desire for a meat substitute and Vegan or vegetarian patties have also significantly improved over the years.  The lazy Portobello mushroom burger is becoming less relevant and chefs across the world are embracing the meat free movement.

Whilst in New York I was lucky enough to be taken to “Superiority Burger” which is a vegetarian restaurant run by Brooks Headley, a former drummer in a punk band.  The patty is indescribable and rightly heralded as probably the best vegetarian burger in the world.  If you know me you’ll know I love meat and burgers.  Imagine my surprise when after eating this burger, twice, I woke up the following mornings on both days craving another one!  I have no idea what is in the burger, frankly I don’t care, but what I and many lucky New Yorkers know is that it is unquestionably a great burger and one which stands up against any burger in the world.

The days of the “freak” meat fear have long gone, the future is in the US, it’ll be here before long.