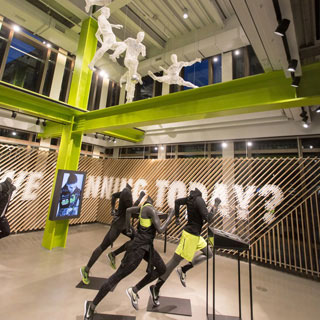 Streetwear has grown at a phenomenal rate. Fuelled by publications like Hypebeast, blogs like Sole Supplier and more recently by high profile brand collaborations, what started with streetwear and music has now gone full fashion, from Kanye to Virgil Abloh, the current Louis Vuitton artistic director. Supreme, the skateboard brand, perhaps epitomise this more than anyone. They disregarded the rules and bootlegged everyone; and in doing so became the most hyped brand on the planet, with queues outside every store on “drop” days and almost every brand from Louis Vuitton to cough pastilles in a rush to collaborate. Nike has seen this probably more acutely that most. For decades across the globe they held the position of the number one streetwear brand on the planet but by refusing to collaborate with Kanye West, they lost their asset and Adidas snapped him up. In doing so Adidas ate away at Nike’s dominant position and became the most relevant mainstream brand around.

Nike’s response to all these conundrums started with their fightback against Adidas. They signed up Virgil Abloh who created his reimagined workings of 10 classic Nike shoes and the comeback was on. Their next step was to open a second store in New York. In line with modern retail, just opening a store with a rack of clothes and a few shoes doesn’t cut the mustard. It’s about the journey, it’s about the experience, it’s about capturing the mood and drawing you in. Nike’s new store locates itself away from streetwear, away from the cool but still manages to command queues and fascination. A fantastic example of a concept store, it’s become known as “Nike’s store of innovation”. Comprising 68,000 sq ft over six floors, it has the largest selection of sneakers for sale in any store, with “grab and go” buying and links back to the Nike “app” for instant purchases. The store layout can be changed; walls can be shifted and showrooms made smaller or larger.

But by far the biggest winner for me (and many other customers) is a personalised customisation station for shoes. Choose a style of shoe and you have thousands of options to create your very own style. The staff wear lab coats and treat the shoes like a science experiment. When I visited the store there were queues a-plenty as tourists and locals alike waited patiently to create their one of a kind Jordan. The store itself was loud; music booming through an art piece of speakers that ran through the central core. In a tough retail world, Nike aren’t scared to do something different, to try and drive traffic to a digital solution; they are comfortable for this to be the ultimate shop window.

Did I like the store? Yes! Would I go back? Yes! Did I buy anything? No. Did I download the app to buy in the future? Yes. The magic worked on me and I’m certain I’m not the only one.