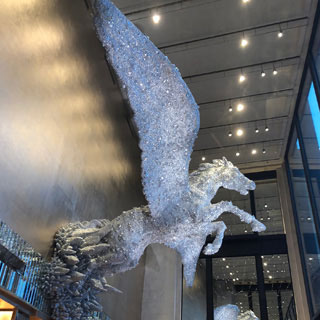 Just in time for the dark days of December, Richard Caring’s sparkling Brassiere of light is a sumptuous combination of Selfridges and Damien Hirst. What’s not to like? Located on Selfridges’ first floor, opposite St Christopher’s Place, Caring’s latest venture is the epitome of its name with floor to ceiling windows that flood the space with natural light. The elegant, art deco design, created by Martin Brudnizki will make you feel like an extra in an Agatha Christie film, evoking all the glamour and sophistication of the Orient Express.  The central bar is well-placed for sipping cocktails or afternoon tea (which arrives amongst a trail of smoke!) True theatre!

Headed up by chef Emanuel Machado (formerly of Covent Garden’s Balthazar), the menu offers British classics and internationally-inspired dishes.  His signature dish is Spaghetti with lobster but we also highly recommend the Pegasus Pie served with a yuzu coconut cloud for dessert.  The cocktails are equally as eclectic and specially created for the restaurant.  The Queen of Time (an all-English interpretation of a Kir Royale, which takes its name from sculpture that sits over the main entrance) and Est. 1909 (a gin and prosecco cocktail inspired by Selfridges 109th anniversary) were particularly palatable.

However, for the real wow factor, you need to look to the vast double height space in the centre of the restaurant.  Here, in true Selfridges’ style, Damien Hirst’s glorious, 24 ft. crystal encrusted Pegasus soars above your head, with hooves lifted, chasing the stars across the sky.  Every aspect of the restaurant is enjoyable, and once you’ve finished staring at the ceiling and need to focus on the more mundane, the washrooms are equally as impressive!  Perhaps inspired by the 1970s Bond movies, they are  riot of baby pink with marble trimmings galore.  Love them or loathe them they are bound to be an Instagram sensation before the party season is out!