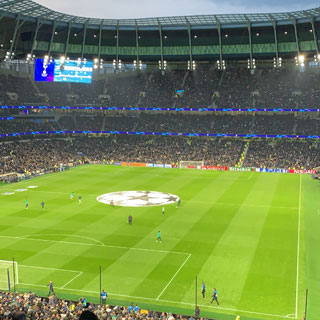 With a capacity of 62,062 it is the largest Premier League stadium in London,  but what really makes it stand out is the attention to detail.  Every element of the stadium has been designed to the most intricate level, with an aim of creating the highest level of fan entertainment.  The south-stand, which is the largest single tier stand in the UK features acoustics similar to a concert hall, the result?  A breathtaking wall of sound that is nothing short of moving.  The hospitality is so luxurious that corporate guests could be forgiven for thinking they were dining in Mayfair, with two Sky Lounges on the top floor offering Michelin star dining and a world first ‘Tunnel Club’ that allows its members to observe the players as they walk from the dressing room to the pitch through a glass-walled tunnel.

For those less pampered fans (such as myself), the offering is equally impressive and yet still more affordable than other clubs.  The food offering is spectacular;  some 60 outlets put together in one glorious foodhall – a great nod to London’s buzzing street-food scene.  The stadium boasts the longest bar in Europe, solving the dreaded half time queues.  Here draft beers are poured from the bottom up (fast pour technology) increasing the speed and reducing bubbles.  Beavertown Micro Brewery is in situ, brewing beers on site and The Tottenham Experience is a whole fleet of shops which together make up the largest retail space of any European club.

The whole stadium is cashless and features state of the art Wi-Fi and beacons which send special offers and news to those who have the Spurs app.  Oh, and let’s not forget the environment.  Everything is recyclable here – all cutlery is wood, bags are string (and you’re charged for them) and drinking vessels are recycled by a facility in nearby Edmonton.

This amazing development has elevated the area as well as the club, setting a new standard for sports stadia worldwide and most importantly it has cemented the fact that North London definitely belongs to Spurs.