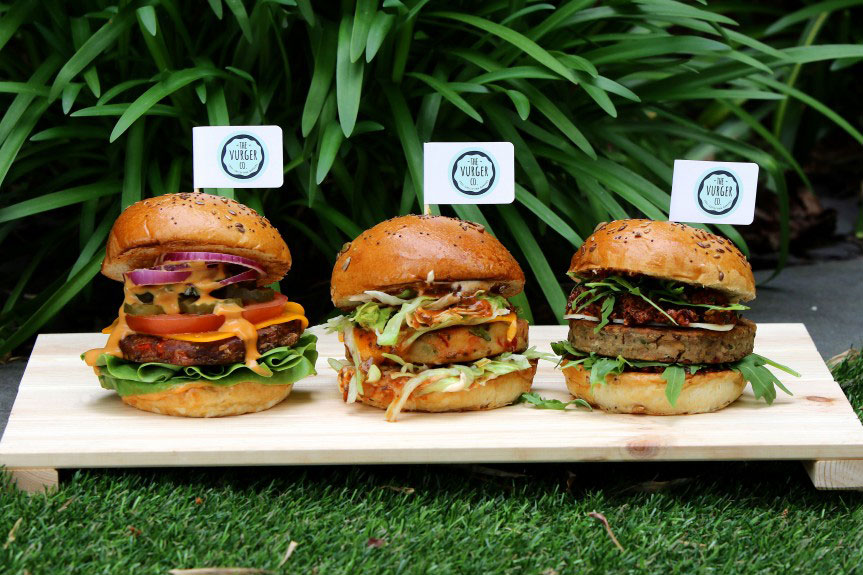 How has the fast casual dining revolution in London affected your business?

For us, it’s everything. For so many years it was so difficult to find fantastic food, in a casual setting and at a sensible price but now it’s become the best way to eat in London. We’ve always loved this way of eating out and we were so excited to create a business that sat right in the middle of the action when it comes to fast casual. There will always be a place for fine dining and London really does have some of the best in the world, but for most people fast casual is going to be the “go-to” option for eating out and it’s definitely the most dynamic sector of the industry.

The vurgers consist of all plant based ingredients, designed for the vegetarian market. Where did this inspiration come from?

The business started when Neil had suffered for years with a really debilitating stomach condition. He had all the tests and scans available and there was still no diagnosis, so we were absolutely convinced that the answer must lay somewhere in the food we were eating. Having been meat eaters for our whole lives, we decided that in our 30th year, there was one thing we hadn’t yet tried! We cut out meat and dairy products from our diets and immediately Neil’s symptoms were dramatically improved. This coincided with us turning 30 and taking a celebratory trip to California. Whilst we were over there, we couldn’t believe how incredible the plant-based food scene was. It was absolutely everywhere and nothing was labelled as ‘vegan’ or ‘vegetarian’ – it was just amazing food, in a really cool space and these places were completely packed. Plant-based food in California is truly mainstream, because they focus on natural produce, rather than processed ingredients, which can often seem intimidating to people who don’t usually eat plant-based food. We had never seen anywhere like that in London so decided that we would create some of our own Vurgers and see what London thought of them. We were completely blown away by the response and our market stall quickly became pop-up restaurants and soon-to-be permanent space – it’s been an amazing year!

At what point did the idea turn from a concept into a reality?

We came back from California last year so full of inspiration and so we immediately got in the kitchen and started experimenting. We spent a few weeks pretty much solidly trying different ideas, whilst also knocking on the door of just about every food market we could find in London until we could get a spot. It’s surprisingly difficult for a new food concept to get a market pitch, but we eventually found ours in Tottenham Green Market and got started. It probably took us a few months of part time trading in markets and pop ups to really see that our concept had a real chance of becoming a great business and since then we’ve been doing everything we can to make that happen. From the very beginning, we set out to change the perception of what plant-based fast food really could be. To us, there are no labels and this is not just for vegetarians and vegans. This is simply great, natural and delicious food that is made for absolutely everyone to enjoy. In March we were reviewed by Tatler magazine and listed as one of their top five burgers in London and we were the only non-meat burger on the list. To us, this is the ultimate validation of our concept and probably the point where we knew things were on the right track.

Pop ups are currently your only business sites. What is the most challenging element of creating such a short term venue

There are so many challenges  – finding a suitable space, using unfamiliar equipment, logistics of setting up and packing away, finding staff who are able to help with one off events – the list goes on! Probably the hardest thing for us is building momentum. We work so hard to build awareness of our brand and our customers get so excited when we announce pop up dates. However when the pop ups are finished, we disappear again for a month and it’s really hard to see daily messages from customers asking where we are and where they can find us! Seeing those messages every day has really pushed us that much harder to find a permanent space!

What future challenges and developments do you foresee in the restaurant industry?

It’s a very challenging industry and very often, many people don’t realise just how tight the margins really are. You don’t have to do much wrong to really start to get into difficulties. On a wider scale, the most immediate problem is the macro economic and political environment we find ourselves in. There’s a lot going on, with Brexit on the horizon, inflation rising rapidly and political instability following the general election. All of these things quickly start to impact consumer confidence and often hospitality is the first ‘luxury’ that people start cutting back on. We still feel that the fast casual sector will remain strong because the relatively lower prices are less susceptible to swings in the economy, but it’s still going to be a real challenge for the next few years. In terms of future developments, it’s really exciting to see that developers and landlords are starting to shift their attention to independent brands rather than the large chains. Consumers are demanding more unique and special offerings, and so many of the new developments we’ve visited over the last few months have pretty much stayed away from the usual chains. Again, they will always have their place, but we might see a little shift for a while to balance things out.

What are the current trends in the marketplace and do you see this changing anytime soon?

We’re seeing no signs of the burger trend slowing down, with all sorts of new varieties of concept popping up almost every week it seems. We’re still seeing lots of steamed buns and also bubble tea seems to be everywhere at the moment. The other one we noticed recently in New York and also now in London is the ice cream that is frozen on a slab in front of you!