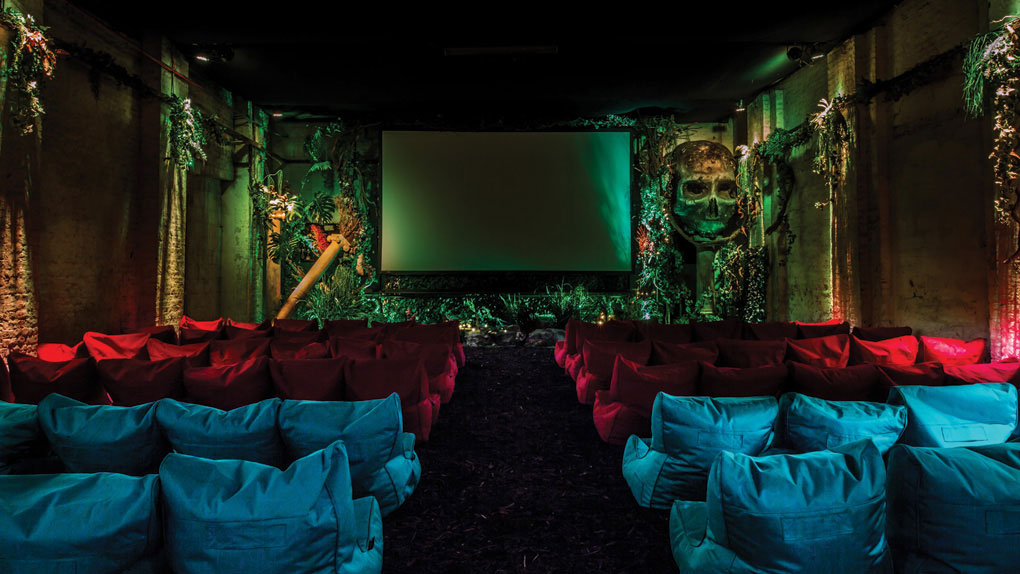 Backyard Cinema was created to provide somewhere cool, where you can watch your favourite films with great food, drinks and friends.

What gave you the idea to first screen a film in your back garden?

It was a passion project. The very first time was something I organised with my friends, purely for fun. A projector had been left behind after a house party and so I decided to use it, along with a bedsheet, and some recycled wood to create a screen. It definitely wasn’t the classiest affair, all the furniture was taken outside into the garden, we set up a sound system and together it created a big screening.

Following from that, what came next? Was it a conscious decision to go more commercial, or was it a more organic experience?

It was definitely more organic. After the first screening, I hosted several more events with friends in my garden but it was becoming expensive supplying the food and drink etc, and so I wanted expand outside of my garden and start selling tickets for it.

For the first pop-up I came up with the name Backyard Cinema, created a website and secured a venue on Great Eastern Street, it was a dingy, yet very moody and cool, candle lit basement. Selling around 30 tickets, I was only expecting friends to turn up, but it was when I realised a couple of people came who had bought online, that I realised it could really become something.

The second residency was at Beach Blanket Babylon in their attic, we had an agreement to screen one film a week, for 6 weeks. Astonishingly, we were featured in The Nudge, and as a result the tickets all sold out within 1 hour. That was the turning point when the business really took off.

In both retail and leisure there has been a strong consumer demand for experiential, engaging experiences – have you found this to increase the success of backyard cinema?

Yes we have, but this was always the ethos behind Backyard Cinema, the whole ‘experience’ was at the core of the brand from the very start. Even with the size of the business now, our customers should always feel like they have been invited into my garden, the same as when we began. People have always commented on the atmosphere. We want people to feel relaxed, if it is their birthday we want to make them feel special, if they are unhappy about their seat then we will just move it. It’s about creating fun and escapism, and that’s what has allowed us to succeed and grow.

Do you think more traditional cinemas will need to diversify and increase their offering to survive such a competitive market, especially in London?

Yes, customers today demand and deserve more and if operators aren’t fulfilling this, they will go elsewhere. We have even been asked to consult for some theme park and ballet companies on how to improve and increase their services.

Which has been your most successful event / film and what do you think contributed to its success?

All of our events we would consider a success; Romeo and Juliet is a sell out every time but our other pop-ups also do staggeringly well. I think this is credit to the research and planning alongside the passion behind what we do.

Do you have any plans to expand outside London?

We are considering expanding the business outside London, but rather than regional cities we are instead potentially looking further afield, possibly into Europe, such as Amsterdam. We want to be part of the most exciting cites on the planet, as well as growing our sites in London.

What attracts you to a venue?

Finding a venue is the hardest thing. The most important factor is size and the structure of the building, whether it has lots of pillars which will obstruct the space. We are first and foremost a cinema, so site lines and the quality of viewing is crucial. Of course as the brand has grown so have the size requirements of our venues.

Typically for our pop-up venues we select old buildings which will be knocked down at some stage.  This means the theme and the venue are very much temporary, creating a romance to the event, that you will never be able to experience watching that film, in that space ever again once its gone. Creating lasting memories.

Just do it, if you have a passion for something, go for it. Four years ago I was working in telephone marketing and today we are selling over 100,000 tickets a year.

Your first permanent fixture is at Mercato Metropolitano in Borough, do you think there are pros and cons to having a permanent site?

This is a definite benefit, we describe it as having ‘the exciting element of a pop-up in a permanent venue’.

What exciting events will you be launching next?

This Christmas season, starting from mid/late November we have residency at both Winter Wonderland and Winterville – our two biggest events to date, running simultaneously! At Winter Wonderland we are screening The Snowman which potentially will attract 3 generations of families to Backyard Cinema, which is essentially a new market of people we haven’t catered for previously. Winterville will be playing a range of classics including winter favourites Home Alone, Frozen and The Nightmare before Christmas.