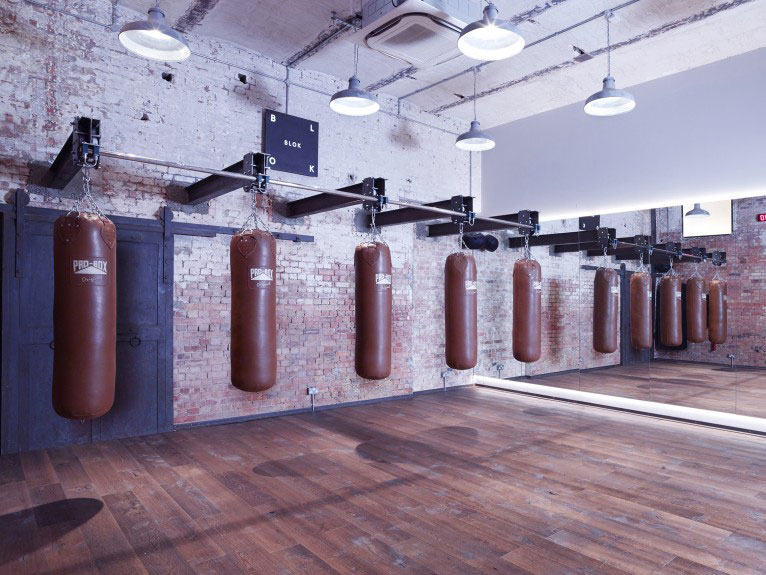 BLOK is a fitness space in Clapton E5, located in a refurbished victorian tram depot. Founded by Ed Stanbury & Max Oppneheim, the BLOK philosophy is that training is about more than just breaking a sweat.

Ed, What is your background and how were you led to opening BLOK?

I am a property developer by trade, working mostly in the East of London and I was searching for warehouse space for my firm when I found this space (an old unused Victorian tram depot). At first I didn’t know what do with the space so I spoke to Max who is a photographer and we both came up with the idea of  integrating a studio fitness gym with an art installation, bone broth café (the only of its kind) and light installations.

How has the BLOK idea developed into what it is now?

Initially we set up with modest plans to do two or three classes including basic yoga and box fit, but after researching we found there was such a huge lack of space where successful young people could go and train somewhere really enjoyable. Our idea was to integrate art, fitness and benefit our customers by actually helping them learn particular exercises which they were then able to progress and build their confidence. We felt that the large guys were destroying peoples desire to train and learn so we decided to create a place where people enjoyed coming back to three, four or five times a week. Finally we felt it was important to use studios with coaches rather than machines, where instructors can bring their own character and intensity to the sessions, as well as building up a relationship with the customer.

BLOK has a mixture of fitness studios, art, lighting and cafes which serve bone broth. How does this eclectic mix all work so well together?

Naturally our space pulls all of the different concepts together very well. We initially designed the space to work as best as possible for a gym and then loads of artists contacted us saying can we use some of the space to display art. After going out and looking for pieces to buy we were contacted by Arran Gregory who was so blown away by the space, he lent us a load of pieces.

What are your future plans for BLOK?

We have just signed for a further 2,000 sq.ft next door, which we will be using to expand our boxing offering. The space is similar to what we have now with huge double height ceilings, exposed beams in one large hall. We are also looking to expand the business and take on new sites, however we are looking for buildings that really tie in with the BLOK ethos. The right property has to have some form of industrial heritage or architectural merit so that we can really make the best use of it and tie it in with the way we have done things in Clapton.

Where do you take your inspirations from for BLOK?

Most of our inspirations came from looking at bars and restaurants where you see the owners putting their life and soul into creating places where people want to go. The level of design and care was something we really felt was lacking in most gyms and we wanted to create that at BLOK. We are friends with the guys down at the Beagle (Hoxton) and Nightjar (Old Street) who are winning prizes for their design and product and we want to be on that level for our fitness classes.

Where do you see the fitness market moving to in the next few years?

We still feel that there are the super high end gyms and member clubs Shoreditch House and Bodyism, however there is a gap in the industry where we are able to give the customer something very bespoke but also offer them value for money. We don’t tie people down to contracts and that gives them flexibility to come and go as and when they want rather than being lured into a twelve month contract and then feeling they have to go because they are forking out a huge sum each month. It creates a negative stigma for that place and somewhere you don’t want to go often.