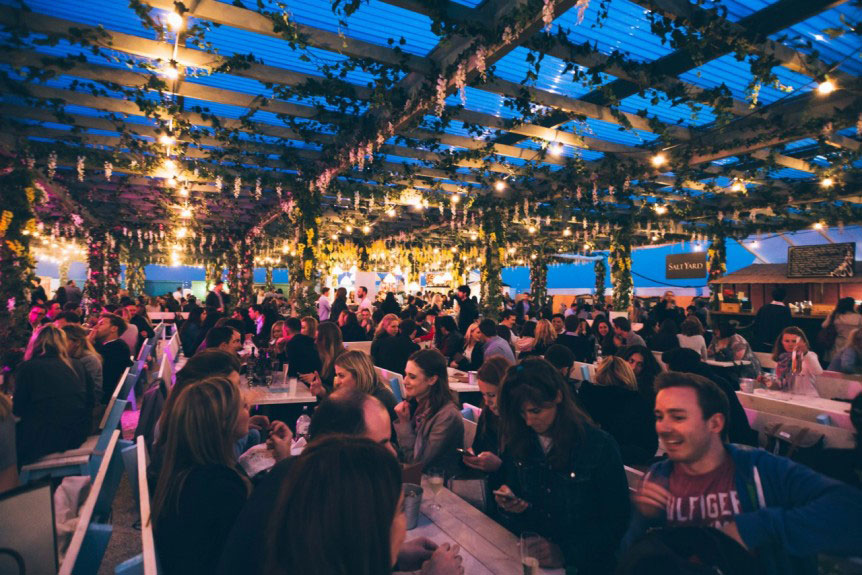 "Nothing is nicer than being with friends and family, eating the best food"

Where have your biggest influences come from?

My biggest influences in terms of Pergola on the Roof have come from spending a lot of time in France and Italy as a child eating al fresco, and in beautiful settings. I don’t think as an industry in the UK we do outside dining that well. Nothing is nicer than being with friends and family, eating the best food in a beautiful setting, and it not costing the earth. When we built Pergola on the Roof and were creating the concept, the way it looked and felt to the customer was the only thing I really thought about. If you get that right, everything else follows.

At what point did your idea change from concept in to reality?

With Feast in 2013, I had a conversation with my Director at my previous company, and we just said ¨let’s do it¨. We then navigated our way through the industry and the rest was history. When I left the company to start my own business in 2015 I took Feast with me.

With Pergola on the Roof, it started in January 2016 – I knew of the site at Television Centre and had known Ian Lindsley from Jefferson Communications, who is the Comms Agency on Television Centre. He put me in touch with Alistair Shaw who is the MD and we had a meeting at Little Feast in Shepherds Bush. I told him the idea, submitted a bid and then we heard in early Feb we had secured the site. I then had to turn Pergola into a reality, which was the hardest part. By April I think I was sleeping around 3 hours a night! Scariest thing I had done, especially due to the scale. A 550 cover restaurant on the roof of a car park in White City seems slightly mad, but when we have the best team who all pushed in the right direction and now here we are, 72,000 visitors through the door to date.

There has been a boom in street food venues recently, why do you think people find them so appealing?

I think its down to choice, the quality is next level and they are so available. 10 years ago it was hard to get amazing food unless you were in restaurants, now its everywhere. You can walk out of work and get a £7 buttermilk chicken burger that would be better than most restaurants.

What do you feel is the key difference between you and your competitors?

Hmmmm. Good question. For us it’s all about the product, the experience and then what the visitor thinks. As long as you nail that then everything comes with – although I’m not sure everyone adopts that thinking.

What were the biggest challenges you faced setting up Pergola?

The biggest challenge with Pergola was how will we bring 5000 people a week here.I didn’t want to sell tickets as I don’t like that model, I don’t think people should have to pay to go and eat.  We needed a combination of a strong food line up and the right concept, then you just need to back yourself and just go for it. Social media plays such a big part of it. We wanted to take bookings from day one so we now secure visitors and don’t just rely on walk ins on the day. We book out 70% and then leave 30% to walk ins. I think in our first month we had 11,000 people booked in, then by June 1st we were on 22,000. Now as I write this we are fully booked every day until we close, bar Sunday lunches. That is so important for us. Our drop out rate of bookings is around 4% so incredibly low, which means you are doing something right. As long as the place looks great, the experience is good and they enjoy themselves then word of mouth kicks in.

Do you see Feast/Pergola diversifying in the future?

I hope so, but for the moment what we are doing is right for us. We’re a seasonal business based around summer and winter, we don’t want to go into full time restaurants as its not what we do. We’ll leave that to the professionals!