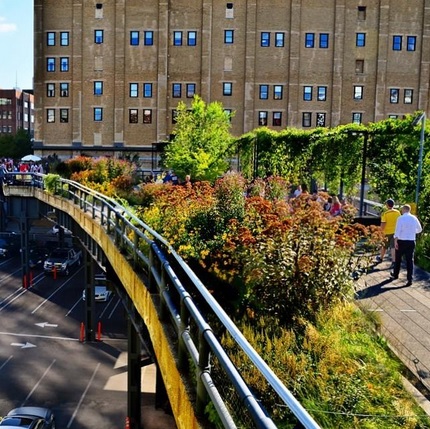 "If it is good enough for a world famous rapper..."

A trip to New York is not complete without a visit to the High Line. Originally built in the 1930s, it took dangerous trains from the streets of Manhattan’s largest industrial district and raised them 30 feet into the air. From 1934 to 1980 it carried meat, goods and post to the meatpacking district and factories of the industrial West Side. This came to an end in the 1980s and the high line came into disuse. Threatened with demolition in 1999, the City of New York and The Friends of the High line fought to preserve and maintain the structure as an elevated public park.

What a success it has been! Now a free public park for locals and tourists to enjoy outside space to soak up the sunshine and an eclectic group of pop up vendors and restaurants. These include Blue Bottle Coffee, Brooklyn Soda Works, Delaney Barbecue’s SmokeLine, La Newyorkina, L’Arte del Gelato, Melt Bakery, People’s Pops, The Taco Truck, and Terroir at The Porch, an open-air, full-service café with wine, beer, and small plates.

After a gentle beer and ice-cream filled stroll down the 1.45-mile-long show garden from West 30th Street we exited for the Standard Grill at 848 Washington Street. If it is good enough for a world famous rapper to receive a slapping from his sister in law then it is good enough for me, and clearly from the drunken antics it had to serve good cocktails!

We were not disappointed; a huge brunch of Huevos Rancheros washed down with delicious Bloody Mary’s in the penny floored Grill. We had to be rolled into a taxi and despite having the stagger off to  a late night party we left before epic Top Floor at the Standard Bar was opened… next time…